Hand Embroidery & Applique in Cotton, Linen, Silk; Polymer Clay; Onyx.  44.25" x 44.25" c. Dianne Ayres, 2020.
California Condors are the largest flighted bird on Earth these days and their story is rather an environmental success.  One intriguing aspect is that there was much debate in the 1980’s whether to capture the remaining 22 Condors in the wild for a captive breeding program or to focus on saving their habitat and let nature play out.  Environmentalist as prominent as David Brower were advocating for the later. Fortunately, the former was the course taken and today there are over 250 flying free and reproducing in the wild and about that many as well in captivity.
What was not fully understood is that habitat loss was not the culprit. In fact, only in 2006, after having released Condors that had been raised in captivity and finding them in distress or dead, was it recognized that the culprit is lead poisoning from bullets. Hunters shoot to the heart and discard the innards of their kill in the wild. Condors, being scavengers, unknowingly consume these deadly meals. Legislation was passed in 2013 to outlaw the use of lead bullets in Condor territory, but still most Condors in the wild by the age of seven have needed to be captured and treated for lead poisoning and the law is often under threat of being repealed.
The making of California Condor - Edge of Extinction
After completing Where is the Middle on Nowhere? the next project I envisioned was creating a life-size California Condor - in flight -- the whole 10 foot wingspan. I experimented with various techniques; embroidery, crochet, making the individual feathers on a wire frame wrapped with yarn... each time giving in to the enormity of the task. But when shelter-in-place in response to the  Covid-19 pandemic was announced I knew it was time to revive the Condor project. While my studio is not in my home it a short distance away. I was there alone and could make as much of a mess as I liked.
I began by renewing my research on Condors and the current status of the recovery program. One key location in the recovery program is Ventana Wildlife Society. I visited there in 2015 and had the amazing experience of seeing two Condors in the wild, not flying, but even perched on a distant high cliff they are truly impressive. VWS sponsors a live nest cam and one particular bird seemed to represent the attitude I wanted to convey - upper right bird in this image.

Being in lockdown meant that I couldn't just pop down to the art or fabric stores for supplies.  I had 44" stretcher bars on hand so that determined the size, a good constraint given the task.

Head First
This called for hand-painted silk, not a technique I had done before. Placing an image under glass on my light table, by the third try I had the cloth for the head.
These are the first two attempts, maybe someday to become the ghosts of Condors past and future....

Handpainted silk head into an embroidery hoop with bound buttonholes to hold the Onyx eyes.

After searching my button box in vein for something like a Condor beak and talons, I decided to try my hand a polymer clay. Fortunately the art store was now set up for curbside pick-up.

I tub dyed fine cotton for the sky and "scrunch-dyed" a flax linen for the cliff.
After refining the overall shape of the bird,  I cut it from some black heavy cotton and basted onto the sky. Condors have a white patch of feathers on their under-wing coverts. These I cut from the white silk and used fusible net along the edges to hold them in place.
To mark for embroidery stitches I used applique tearaway as an overlay to pencil in guidelines. This technique worked well for the feather stitches of white silk embroidery on the white appliques and for the left black-on-black wing stitches but the tearaway is tough to tear away so for right black satin stitched wings I adopted another technique. I used the tearaway guidelines to stitch the couching thread for the centers of each feather and a basting thread for the edges. Then I removed the tearaway. filled in satin stitches in black perle cotton embroidery, and ran the rayon/cotton DK weight black yarn under the couching stitch for the center line of each primary feather. 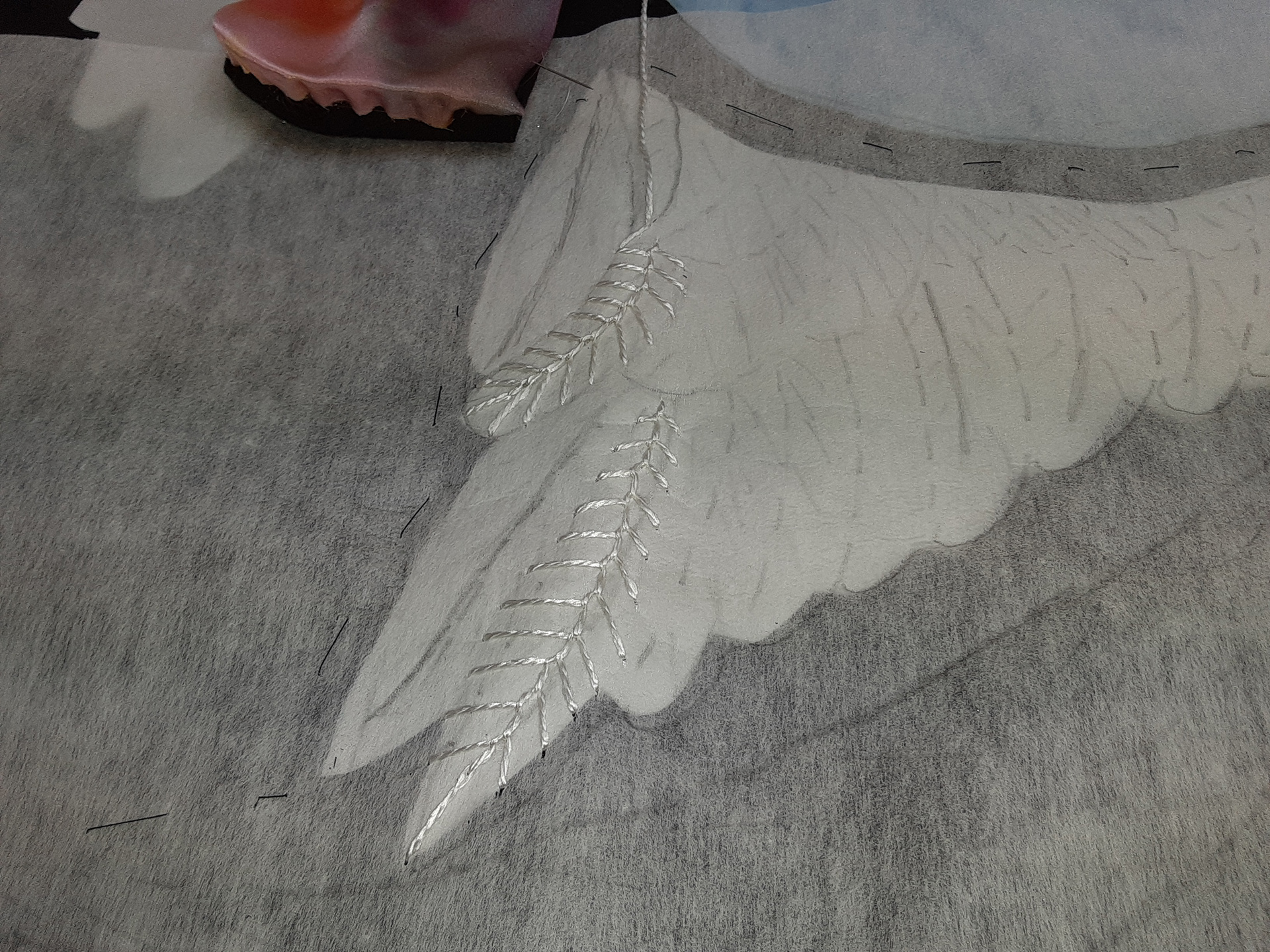 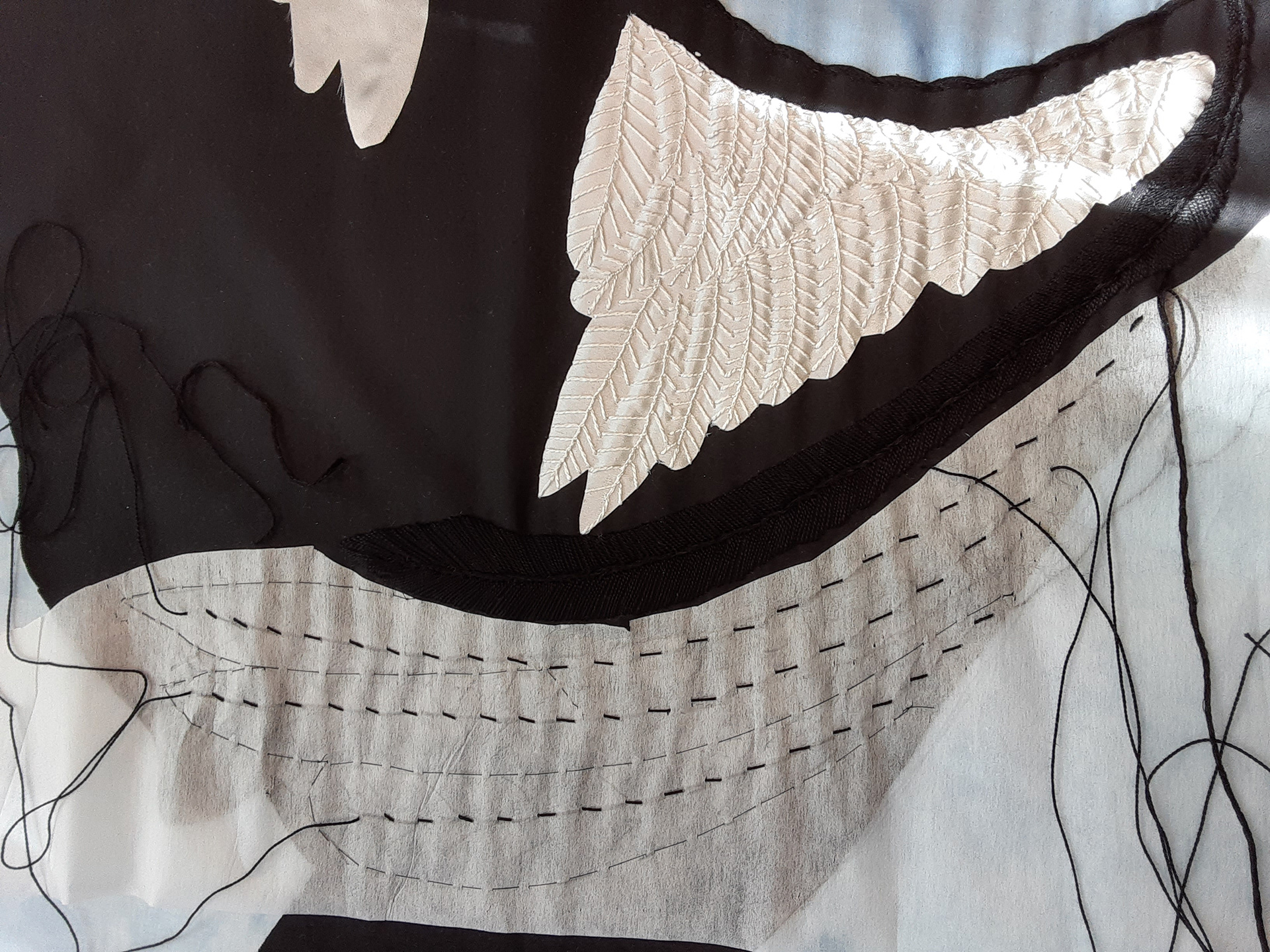 Removing the applique tearaway was a slow-going task.
Various stitches for the body and underwing feathers.

Condors are known for being somewhat gregarious around humans, especially those raised early in the breeding program and released into the wild. I've heard of them playing "tag" with back-country hikers and joining backpackers at their lunch break, sitting nearby,
patiently
waiting...
Protocol for the captive breeding program changed so as not to imprint a connection to humans, but I still imagine Condors recognize that they are receiving special attention.
Thus, my poem acknowledges their special status and having recovered from near extinction. "Vwaha" is Condorese for voila - their mouth structure just cannot pull off the fancy French. The twenty-two small black stitches represent the last remaining California Condors existing on Earth in 1987 which were taken into captivity.
22 birds made up the entirety of the species!
As noted above, the breeding program has shown great success. I encourage you to learn more about these amazing birds and always consider all species that share this planet.
- Dianne Ayres

Letters of Transit - Passports for Birds

Where is the Middle of Nowhere?
↑Back to Top